Aegina Eine Artwaltz (アイギナ＝アイネ＝アルトワルツ, Aigina Aine Arutowarutsu?)  is one of Gulcasa's commanders. Both she and her sister Luciana are eighteen years of age. It is revealed in Yggdra Union's prequel game, Blaze Union, that she and her twin sister were actually born as the princesses of Fantasinia, but an order to assassinate them came right after they were born. A soldier managed to smuggle them out of the country, after which they were adopted by a noble named Marquis Albelt and raised in seclusion within his city. Aegina was told that she and Luciana were abandoned because of the old superstition that twins were bad luck, and the two of them spent their lives learning to fight so that they could one day kill the father who abandoned them as well as Yggdra, the younger sister who replaced them.

Aegina is quiet and serious in contrast to her more fun-loving sister. However, once angered, she refuses to listen to reason and displays great passion. Her favorite food is mushrooms.

Just like her twin sister Aegina has long blonde hair which is plaided into a braid and blue eyes. But after losing her right eye to Elena, she wears bandages over it. She, like her sister, wears the same kind of armor but with hers having more red on her armor. In order to tell her apart from Luciana, note that Aegina's left shoulderpad is black, while Luciana's left shoulderpad is red. 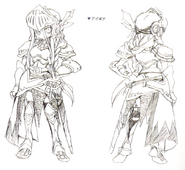 Aegina's art in Blaze Union.
Add a photo to this gallery

Aegina's Battle Theme as it is in Blaze Union.

Retrieved from "https://deptheaven.fandom.com/wiki/Aegina?oldid=25837"
Community content is available under CC-BY-SA unless otherwise noted.