Aghart, known as the Holy Beast, is the first Accursed encountered in Riviera: The Promised Land. It is quite powerful and has total command over fire. Aghart's gender is never specified, but it can be presumed to be female. Aghart is later reborn in the Maze of Shadows as a Dark Progenitor, named "Dark Aghart". The Ignis Spear is rewarded for S-Ranking this boss.

Aghart is encountered by Ein and Ledah in the final area of Heaven's Gate. It was summoned by Ursula in an attempt to keep the two Grim Angels from entering Riviera and actuating the Retribution.

The Holy Beast
Add a photo to this gallery 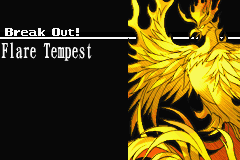 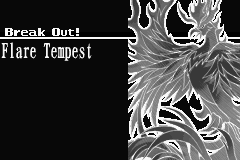 CG from the PSP port of Aghart appearing before the two Grim Angels.

An inverted palette swap of Aghart's default portrait.
Add a photo to this gallery

With Ledah, this fight is impossible to lose; the real challenge is S-Ranking it while keeping Ein from getting grilled by Aghart's harsh fire. This can be somewhat difficult if Ein's stats have not been increased by Skilling Up (minus the one mandatory Double Slash), or enhanced by the power ups strewn throughout Heaven's Gate. It is recommended to bring in the Einherjar, an unused Fire Orb found in a chest in Heaven's Gate, and a Potion set of at least 2. Have Ein use the Fire Orb ASAP to brace for Aghart's first attack which should almost always be Reap. Raid Burner inflicts superior damage while hitting both your Angels. Burn Up raises Aghart's Magic stat, but sacrifices a very minuscule 25 HP. Burn Up is least likely to be used in the battle.

While Ledah keeps up the offense with Divide, have Ein use Double Slash as often as possible, healing when needed. Be sure to use the Fire Orb again after a few turns, as its effects will nullify after a while, and Aghart's attacks will inflict full damage on him. Also be weary of Aghart's wait time; if its Rage is maxed out and Ein is down to half HP or less, you are in danger of losing him. Aghart's Signature move: Flare Tempest is the killer, as it can easily eliminate more than half of Ein's HP if he is not supported by the Fire Orb. Don't worry about Ledah at all; Ein's safety is of the utmost in order to fight optimally and have a chance of scoring a high rank.

Your goal is to drop Aghart's HP down to about 1,200 or less. Be sure that Lost Seraph is at the ready, with three tiers filled in the Overdrive Meter. When setting up to finish Aghart, do NOT use any of Ein's Over Skills, because they will deplete the meter and reduce Lost Seraph's potency, which will jeopardize your S-Rank opportunity. If done correctly you are pretty much guaranteed an S Rank and the Ignis Spear; Ein might even Skill Up at the end of the battle if the Fire Orb isn't used up completely. Be mindful of stat variants and the RNG, as they can change the results of this strategy. If Ledah misses his attacks too often, an S rank may not be possible. Be prepared to eat a Flare Tempest or two, it is inevitable.

An alternative option for handling Aghart with ease is available in a New Game+ file. If the player managed to S-Rank the final boss in a prior playthrough, the Longinus will replace the Rosier in Stage 1. Ein will handily trivialize Aghart should the player decide to use it.

The Dark Aghart boss fight is nearly identical, but interestingly, the boss has half as much HP as the original Aghart. In spite of this fact, Dark Aghart's stats and the strength of its moves are otherwise superior to scale with how late into the game the battle is. Aghart has high magic and resists all elements pretty well, so anti-air is the best option against it. Use whatever item/heroine set-up you feel is best with what resources you have.

Retrieved from "https://deptheaven.fandom.com/wiki/Aghart?oldid=27508"
Community content is available under CC-BY-SA unless otherwise noted.