Alier (アーリエ＝シエル＝グレイスヘーゼ, Ārie Shieru Gureisuhēze, lit. Arie Ciel Graceheather?) is an enemy in Knights in the Nightmare. She is the princess of the Tiamats and betrothed to Prince Nordich. She has a dragon pet, Aeolos.

The princess of the Tiamat people, a race descended from dragons. She agreed to an arranged marriage with Prince Nordich to repair relations between the two kingdoms, but these plans were laid to waste when tragedy struck..."

Alier and Aeolos as the boss in Scene 44 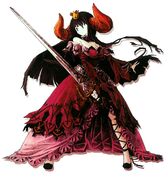 A complete portrait of Alier by Y. Iwanaga
Add a photo to this gallery

Retrieved from "https://deptheaven.fandom.com/wiki/Alier?oldid=29235"
Community content is available under CC-BY-SA unless otherwise noted.