Archangel is the fourth Accursed fought in Riviera: The Promised Land. She is encountered at the Flaybell Cathedral in Tetyth. It isn't outright stated, but Archangel is Marietta: a fallen angel who was banished from Asgard and has lost her former identity. It's for this reason that Ein condemns her and chooses to pass judgement on her. She returns once more as "Dark Angel", a Dark Progenitor. You will obtain the Saint Scepter for S-Ranking this boss.

The Fallen Angel
Add a photo to this gallery 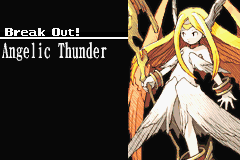 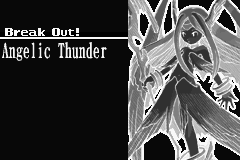 CG of Archangel from the PSP port.
Add a photo to this gallery

Archangel is the game's midway boss and a rather nasty one at that. Serene and Ein can barely stand up to her due to the former's weakness to Lightning and the latter's low Magic stat. Also, because she is extremely resistant to Holy damage, it is not wise to bring in Einherjar and attempt Disaresta. Furthermore, her Angelic Thunder can easily one-shot Serene and take out Ein if he has sustained enough damage. She does have one fatal flaw: her weakness to Physical and Anti Air attacks, as well as having low Strength; this is the key to S-Ranking her and obtaining her Saint Scepter (Ancardia in PSP version).

The easiest way to beat her quickly is to bring in Fia and Lina and be sure to have the Zantetsu and Iria's Bow; Lina must have Barrage for this fight. The Attack formation would be optimal, and Fia and Lina should be in the front line. Fia's skill with Zantetsu picks on her low strength and inflicts heavy damage. Be careful of Angelic Thunder; be sure to have a healing item of your choice in your inventory. Once you drop her HP down to about 40-50% (depending on how strong your Lina is), tear her apart with Lina's Barrage Over Skill. This OS is very strong against her because it is both Physical and Anti Air, exploiting her two weaknesses while being fairly powerful.

Please be mindful that the preceding was strategy and is subjective; some players may not have the weapons needed for it, or other requirements such as having the Barrage Over Skill. Simply choose your items and characters carefully and pick on her weaknesses. Disaresta is not needed to S Rank Archangel; as long as she is finished with a Lv. 3 Over Skill quickly enough, you can still reliably get an S.

Retrieved from "https://deptheaven.fandom.com/wiki/Archangel?oldid=27704"
Community content is available under CC-BY-SA unless otherwise noted.