Assassins are professional killers, armed with a claw and a crossbow in each hand. Their weapon affinity is that of a bow, making them useful against units with the rod weapon affinity, but ineffective against units wielding a sword, axe or spear. During an aggressive assault, an assassin's attacks against their enemies gain dark elemental damage like that of a Necromancer.

The assassin class leans more towards heavy offense, and does not play very well defensively unless Bloody Claw is used efficiently. Nevertheless, this class has a few great abilities. 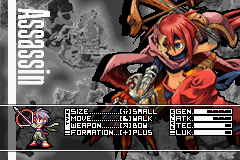 Assassins have abysmal GEN and sub-par ATK, but compensate for them with their amazing TEC and LUK stats. 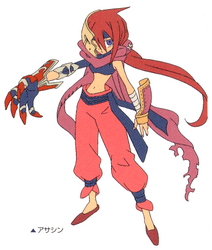 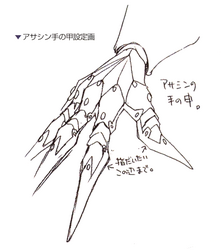 Assassin's claw.
Add a photo to this gallery 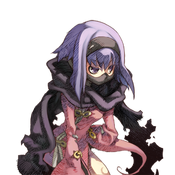 Units of this class boast superb agility. Assassins can strike quickly and often, with low Delay penalties for movement and attack, making them ideal at responding to enemy attacks on your base. They are skilled in close combat but their constitution leaves much to be desired, so it is best to use Assassins for hit-and-run strategies.

Retrieved from "https://deptheaven.fandom.com/wiki/Assassin?oldid=30237"
Community content is available under CC-BY-SA unless otherwise noted.