Baldus
The God of War

A fifty five-year-old grizzled and experienced veteran, Baldus (バルドゥス, Barudusu?) is the oldest member of the Imperial Army. He is known as the God of War, a title handed down to the most powerful soldier in the Imperial Army. He is a native of Ishnad and is incredibly loyal to Gulcasa, serving as the Imperial defensive strategist. Although he is first encountered either in Lenessey or the battle for Castle Paltina (depending on whether the player completes the alternate Lenessey battlefields or not), his default post seems to be defending Fort Ishnad, the only entrance to Bronquia; this gives him the nickname "Bronquia's Shield". The only way to capture Ishnad is to defeat Baldus and his Guardian Knights.

In the alternate Lenessey battlefields, Baldus is revealed to have been Bly's rival when he was a young captain.

He's voiced by Inada Tetsu in the PSP version.

Baldus is well-liked and respected by everyone in the Imperial Army, and treats even his enemies with courtesy. He is also known to be serious and earnest, and thus values fair play. Matched up against Yggdra's forces, Baldus finds himself enjoying the chance to duel with a worthy opponent, especially Durant, a fellow knight. 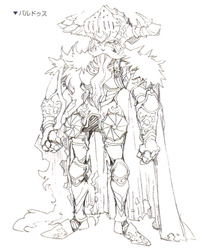 Retrieved from "https://deptheaven.fandom.com/wiki/Baldus?oldid=25839"
Community content is available under CC-BY-SA unless otherwise noted.