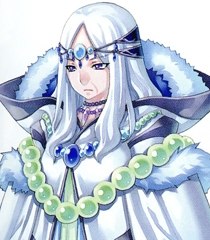 Baretreenu (ベアトリーヌ, Beatorīnu?) is a priestess in her early forties who appears late in routes A and C. Baretreenu resides in Lost Aries, doing research on Brongaa at an ancient shrine devoted to worshiping the dragon. She is capable of powerful magic that can temporarily seal the powers of Brongaa's descendants, and desires to develop a more permanent seal. Because of her studies, she is considered one of the experts on Brongaa's power, and for unknown reasons she seems aware of the structure of the Dept. Heaven universe.

In actuality, she is Gulcasa's mother; when he was a very small child, she decided to seal his powers for fear of his unusually potent blood. She renamed him "Garlot" in order to complete the seal, and then left the family in order to research Brongaa. In route A, she is encountered at Brongaa's shrine, where she explains her background to Garlot. At the same time, she reveals that she was aware that he was being abused by his father, but chose not to return home and intervene. She stages a duel to the death with him in order to test his resolve and determine whether he has the right to undo the seal; she chastises him for his reluctance to kill her, saying that because Brongaa's power is cruel and monstrous, he must be willing to throw away his humanity if he truly wants it. Upon the player's victory, Baretreenu breaks the seal willingly by revealing her son's true name, then dies.

In route C, Velleman summons her in order to have her treat Thortie's Brongaa-related illness, and then she joins the party. Though Garlot remarks that she seems familiar, Baretreenu does not reveal their relationship. With Nessiah's help, she manages to cure Thortie, and later accuses him of placing a new curse of control on the Emperor, which pressures him into turning on Gram Blaze. Although her role in this route is otherwise small, Baretreenu also produces a tonic that is strong enough to break Nessiah's control over Thortie and prevent him from trying it again.

She is 162 cm tall and voiced by Asaka Dodo. 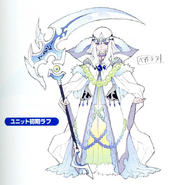 Add a photo to this gallery
Retrieved from "https://deptheaven.fandom.com/wiki/Baretreenu?oldid=16575"
Community content is available under CC-BY-SA unless otherwise noted.