At the southernmost tip of the continent is the land of Norn Valley.

Although this barren land of rocky mountains and red earth is Fantasinia Kingdom territory, it has become a haunt for thieves.

Through this wasteland runs a girl, kicking up a trail of dust as she flees.

The story begins with Yggdra running from her pursuers. She comes to a dead end and hides in a seemingly abandoned fort. Her pursuers arrive shortly thereafter and burn the fort in an attempt to smoke her out. However, a band of thieves intervene and attack the aggressors. 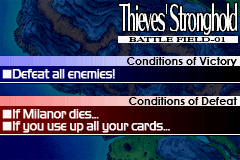 Milanor is invincible in this one, so there's little reason to use Flunky. If you are a new player, be sure to follow the in-game tutorial, or click here if additional help is needed. In the GBA version, obtaining the +2 MVP bonus is a very simple matter, but the PSP one is a little different due to the AI's behavior. Use Steal to have Flunky attack the Bandit up front, and then move Milanor next to the Assassin so that she'll attack him on their phase. The battle is fixed on Night.

The boss of this BF is ???, a Valkyrie equipped with the Iron Choker. Stomp her with Milanor; as mentioned before, Milanor cannot lose under any circumstance in BF01. She will drop her Iron Choker upon defeat because Milanor's LUK is high enough.

Milanor and his gang will ally themselves with the princess they rescued after the battle. You will receive Revolution from the boss, in addition to Banish and Sanctuary from Yggdra.

Retrieved from "https://deptheaven.fandom.com/wiki/Battle_Field_01?oldid=23238"
Community content is available under CC-BY-SA unless otherwise noted.