Milanor and his men were able to drive off the invaders who attacked their fort. In the process, they saved the ousted Princess Yggdra from the Imperial Army, ensuring that from then on, their steps would be constantly hounded by the Imperial forces.

Milanor left the burnt husk of a fort and headed with Yggdra to the Orlando Plains, where the Royal Cavalry supposedly waited. At the Jaws of the Wolf, connecting Norn Valley and the Orlando Plains, mercenaries working for the Empire lay in wait for Milanor's gang of thieves.

Milanor and his band of thieves intend to escort Princess Yggdra to the Royal Cavalry from whom she was separated. They hoped to rendezvous with them unimpeded by way of the Jaws, but Inzaghi's mercenary band barricaded the path. 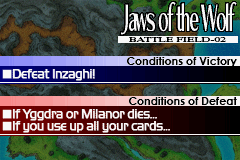 The enemies are stationary and will go on the offense only if a unit is placed next to them. Use this BF to get Yggdra some EXP, and kill the Bandit near the starting point to clear the path to the village in the bottom left corner. Have Yggdra attack Fencers and move Milanor to the village tile during Noon or Evening to obtain the Fur item. Afterward, how you deal with Inzaghi is up to you; Yggdra will win if she charges him, but Milanor is ideal to finish him if you want him to drop his item. Remember that Milanor's invincibility is now gone, so play wisely.

The boss of BF02 is Inzaghi, a Fencer. Milanor's weapon disadvantage against him is null because the entire map is a wasteland, terrain in which Milanor excels. Use Milanor to defeat Inzaghi if you want the Leather Hat. Yggdra will win if she charges him, since she blocks counters, but there's a 50/50 chance she can lose on defense. After Inzaghi is defeated, the battle is not yet over...

After Inzaghi is wiped out, Leon and his Heavy Knights will appear from behind the starting point, opening up more of the map. 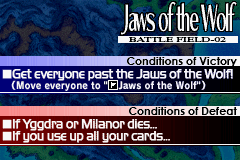 If you left one of your units there for whatever reason, this is going to suck for you, because the enemy moves first. Very bad if Yggdra was being lazy. The AI is programmed to move as many units as possible, rather than just rushing to the nearest target and attacking; as long as Yggdra and Milanor are a few paces away from the starting location, they'll be fine. Do not engage them, just move your units to the goal and you'll win.

You should not be able to fight him now since his men will move first. Concentrate on the objective.

Kylier will appear and set off a trap which will destroy the escape route, cutting off the Imperial pursuers. Milanor and Yggdra safely advance to the Orlando Plains. You will receive Banshee's Cry from Inzaghi.

Retrieved from "https://deptheaven.fandom.com/wiki/Battle_Field_02?oldid=30327"
Community content is available under CC-BY-SA unless otherwise noted.