Start a Wiki
Milanor's old friend Kylier destroyed a key structure at the Jaws of the Wolf, which blocked the Imperial Army's pursuit. Thanks to her, Yggdra and the others were able to escape the Black Knight Leon and safely reach the Orlando Plains.

Once there, they found the Royal Cavalry under attack by the Imperiel Court Magician Eudy, with only Durant's unit remaining...

Upon arrival in West Orlando, Milanor and Yggdra find that the Royal Cavalry has been decimated, with only Durant still in one piece. The first order of business is to rescue him and regroup. 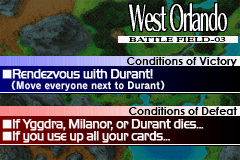 This can be a little bit trickier than it seems. The enemies get the first move; they will focus on Durant for the most part. Because the goal is to move Yggdra and Milanor next to him, you need to find a way to clear the enemies (preferably without Durant taking any damage, but he's at the mercy of the RNG). Also note that the formation and CPU behavior is a bit different between the GBA and PSP versions. Don't rush in recklessly; Eudy and her witches will remain stationary for this part of the battle, so there is no need to engage them. The aggressive forces will attack units placed next to them, and use what little movement available to try and keep Durant blocked off. Durant will not initiate attacks on his own, remember that.

The sub boss is a generic Knight, but he cannot be killed now because he is under the Protect status. In the GBA version, he is stationed closest to the starting location; in the PSP version, he is occupying the village at the top.

Once Durant has been rescued, Yggdra will officially found the Royal Liberation Army. Now all that's left is to clean up the pursuers. Easy, right? ...right? Also, Durant gives us Ace Guard, though it cannot be used as of yet. 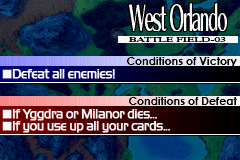 The map has become a bit larger, with the starting location being in a new area above where Durant was cornered. You will now be able to utilize the eponymous Union system. It's recommended to save your high movement cards to approach Eudy's army. Now the generic leader is placed on the bridge, which will give him a slight terrain advantage in addition to making him a bit more durable. Try to kill him as swiftly as you can, then move in; his entire unit goes down with him when he dies.

Eudy's witches will simply move around, and attack whoever comes near; they're obviously programmed to stall as much as they can, so take the initiative. Your goal is to kill all enemies, including Eudy herself, which is easier said than done.

Don't forget to pick up the Fur Coat if you obtained the Fur in the previous BF. It is found in the village next to the bridge the boss is on, but you cannot obtain it at night.

Put simply, Eudy is no joke. If Milanor did not get an MVP boost for ATK, obtaining her Ruby Staff just became that much harder. To add insult to injury, enemies in the third part can snag the staff from you (assuming you manage to make her drop it) because they get the first move. As for Eudy herself, her stats at this point in the game are nothing to scoff at. Compound that with the fact that rods are advantageous against your own units, in addition to the obnoxious power boost she receives in Rage mode due to her Ruby Staff, and you're dealing with easily the nastiest boss in the early game. Tread carefully when challenging her, and do not sacrifice Morale and efficiency trying to get the Ruby Staff.

It's wise to utilize the Bridge tile in her general area to give Durant the power boost he needs to flatten Eudy, especially when charging. If one does manage to retrieve her Ruby Staff, a certain mage character will make much better use of it than their counterpart. Be prepared for a potential ambush attack when Eudy goes down.

Hopefully Eudy didn't give you too much trouble. No time to celebrate though, because Aegina shows up just in time to ruin your day. Does she look familiar? 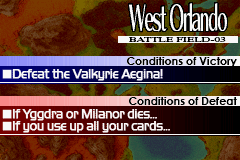 You know the drill by now.

This isn't too bad compared to what you just got through, and can be over pretty quickly with Durant's help. Keep Milanor safely out of their range, as he stands little chance, especially against Aegina herself. Yggdra is immune to Holy, so use this to your advantage; the same holds true for the enemies, so take care not to send Yggdra into aggressive mode.

Aegina is only really a threat to Milanor. The Flamberg has the same effect as the Ruby Staff before it, but skills are not available yet and her element is actually Holy, so it does little beyond just providing her with stat buffs. If you really want the item, Milanor is the only unit you have who can make her drop it, so unionize and plan well.

After Aegina's unit is sent packing, the Liberation Army wastes no time and heads east to regroup. After the BF is over, you'll acquire the Flame card from Eudy.

Retrieved from "https://deptheaven.fandom.com/wiki/Battle_Field_03?oldid=22058"
Community content is available under CC-BY-SA unless otherwise noted.