Blue Fool is a minor antagonist from Chapter 4 - Sunken Wisdom in Riviera: The Promised Land. He is the brother of Red Sage. As the party enters Tetyth, he and his sister plotted to drown them in a gradually rising flood. Fool is fought first, instead of together with Sage, in the Colosseo. After they are both defeated, the twins will not appear again. Blue Bomber is obtained if an S Rank is achieved.

Despite appearances, Blue Fool is not to be taken lightly, and can be tricky to S-Rank. Fool is accompanied by a pair of demons in the front row, while he is in the back. The reason this boss can be difficult is because once you take out both of his familiars, his Rage Meter will be fixed at half, allowing him to spam his nasty Illusion Waltz Break Out!. He's not quite as strong as Sage, but just be prepared to be seeing his Break Out! often, which means healing will come in handy. If you're going for an S Rank, try to have a powerful Fire or Lightning Lv. 3 Over Skill; Cierra can reliably finish him off with one of her devastating Lv. 3 Over Skills. 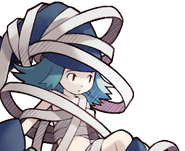 Blue Fool (left) and Red Sage (right)
Add a photo to this gallery
Retrieved from "https://deptheaven.fandom.com/wiki/Blue_Fool?oldid=26374"
Community content is available under CC-BY-SA unless otherwise noted.