Canaan (カナン, Kanan?) is Monica's childhood friend, the seventeen-year-old Canaan is the co-commander of the Bardot militia. They formed the militia by gathering the youths from their village, Bardot, in an attempt to stop the Royal Army's invasion. Enraged over Monica's death, he stubbornly refuses to surrender to the Royal Army. Just like Monica and her forces, Canaan and his forces are novices when it comes to armed combat. Thus, he is defeated by Yggdra's army much the same way Monica was despite a rescue attempt by Emilia, the only Imperial commander available at the time. His character is comparable to Milanor's after Kylier's death (and can be seen as foreshadowing that event); he seems to have feelings for Monica. 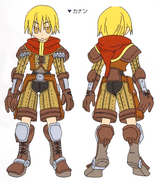 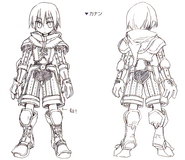 Canaan's art (colorless)
Add a photo to this gallery

Retrieved from "https://deptheaven.fandom.com/wiki/Canaan?oldid=25920"
Community content is available under CC-BY-SA unless otherwise noted.