Duelist (デュエリスト, Dyuerisuto?) is a Knight Class in Knights in the Nightmare. These units are suited for attacking from the front of the area, striking forward.

An attacker that skillfully wields a rapier on front lines. Her jumping attacks allow her to thrust deep into enemy territory.

Pierce: Attack in s straight line with a swift and powerful stab. This Law attack targets the 3 tiles directly infront of the duelist, and a 5-tile line directly ahead of her (T-shaped attack).

Jump Attack: Jump one space ahead and slash all around upon landing. This Chaos attack has a small, + shaped radius. 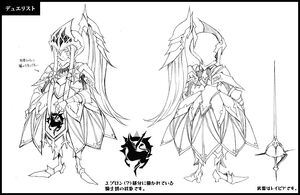 In Gungnir, Duelist is the signature class of Natalia. This class utilizes swords and rapiers in combat.

Retrieved from "https://deptheaven.fandom.com/wiki/Duelist?oldid=29795"
Community content is available under CC-BY-SA unless otherwise noted.