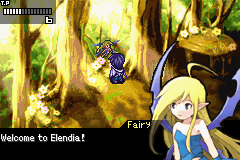 Elendia is the main hub location in Riviera: The Promised Land where you'll be revisiting often to prepare for the next adventure and interacting with various NPCs. The village is named after the forest in which it resides. You are able of collect various items and weapons amongst the different sublocations it is comprised of. This is also the home of Lina and Fia, and Serene and Cierra will settle in once they are encountered as well.

Retrieved from "https://deptheaven.fandom.com/wiki/Elendia?oldid=21911"
Community content is available under CC-BY-SA unless otherwise noted.