Start a Wiki
Emelone (エメローネ, Emerōne?) is the queen of Embellia and technically of all Undines, twenty-six years of age. Before the Transmigragem was stolen, she was allied with Yggdra's father, Ordene. In comparison to her troops, who often come across as angry zealots blaming all humans for their misfortunes, Emelone is portrayed as calm, level-headed, and wise. When Yggdra asks her to call off the attacks on humans, Emelone replies that while she also doesn't think it's a solution to the Undines' problems, she is obligated to do whatever she can to protect them as their queen. Taking this refusal to surrender as unforgivable, Yggdra and her army battle and kill Emelone's forces, but are left confused as to whether they did the right thing.

Although her role is brief, Emelone is actually the first to introduce the concept that every nation has its own unique concept of justice, which becomes apparent in chapters seven and eight. She's voiced by Yuki Makishima in Japanese and Tara Platt in English. 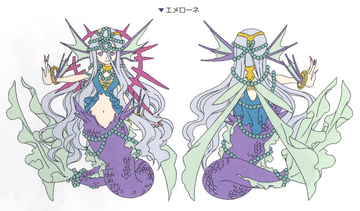 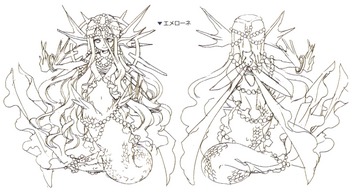 Retrieved from "https://deptheaven.fandom.com/wiki/Emelone?oldid=27921"
Community content is available under CC-BY-SA unless otherwise noted.