Emilia (エミリオ, Emirio?) is Gulcasa's younger sister, "Scarlet Princess" Emilia (緋雪姫エミリオ Hiyukihime Emirio) is one of his Five Dragon Generals at only fourteen years old. She's incredibly powerful despite her youth, and is braver than most people twice her age; unfortunately, many of her own allies (except Gulcasa, Baldus, and Leon) tend to indicate that she should keep away from the battlefield due to her age. Because of this, Emilia is given to insisting loudly that she's not a child anymore, and is prone to fits of rage when anyone in the Royal Army calls her a kid. Ironically, her preference for Goth-Loli clothing makes her look much younger than she is... Still, Emilia takes to the battlefield more than any other member of the Imperial Army, and rescues her brother on many occasions. She is the youngest Officer and the youngest among the Five Dragon Generals.

The extras reveal that she and Gulcasa are only half-siblings and that she too, is a descendant of Brongaa, although unlike Gulcasa, she isn't pureblooded and thus not quite as strong as he is.

In Blaze Union Emilia is known as Eimi. She is voiced by Nonaka Ai.

There is also a special bad ending that is shown in the game which can be obtained by overusing her in every battle in the game on Hard Mode up until Chapter 50; the Brongaa blood within her grows so powerful that she goes insane for power, and kills Yggdra in her insanity. Gram Blaze is forced to subdue her, and she dies from the wounds she sustained due to Gram sealing the Brongaa power within her.

Emilia's theme is "Immaturity Knows No Sin" (幼さは罪を知らず?). It is played during her attacks in Blaze Union. 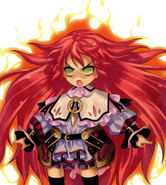 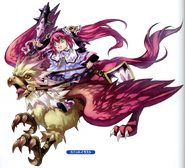 Retrieved from "https://deptheaven.fandom.com/wiki/Emilia?oldid=27955"
Community content is available under CC-BY-SA unless otherwise noted.