Giulio Raguel (ジュリオ・ラグウェル, Jurio Raguweru?) is the main protagonist in Gungnir. He is a Fencer who can wield both swords and the Demon Lance Gungnir.  Born and raised in the Espada slums, he aspires to live up to the reputation of his father Ricardo Raguel, the great hero and first leader of the resistance movement known as Esperanza . Giulio was trained under brother Ragnus and has since participated in several operations. He leads his own squad.

He loves and cherishes his older sister Fiona, who was also born and raised in Espada slums and adopted older brother Ragnus, who is of Daltan blood. He is generally known as a bright, cheerful boy who puts his friends and family first, though he has no problem slaughtering innocent Daltan citizens for the sake of Esperanza's cause. Giulio is heavily hinted at to be the harbinger of the apocalypse; he was born with a Stigmata mark on the left side of his chest as pointed out by Fiona and Elise. The Stigmata is said to resemble a stab wound.

Giulio has brown wavy hair and green eyes. He dresses mostly in blue. 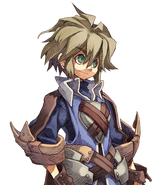 Add a photo to this gallery
Retrieved from "https://deptheaven.fandom.com/wiki/Giulio_Raguel?oldid=29868"
Community content is available under CC-BY-SA unless otherwise noted.