Gordon (ゴードン, Gōdon?) is a character in Yggdra Union and Yggdra Unison. Only appearing in chapter 5, the twenty-eight-year-old Gordon is a loyal Temple Knight serving under Pope Joachim's sect of the Meria religion. He joins up with the Royal Army temporarily to assist in clearing out the corrupt members of the church and get Yggdra crowned so that she may combat the Imperial Army's next move. It is possible to have Gordon die permanently in Battle Field 32, while fighting Gulcasa—though it is just as possible for him to survive. He's voiced by Watanabe Takehiko in the PSP version. 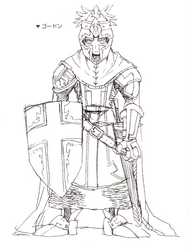 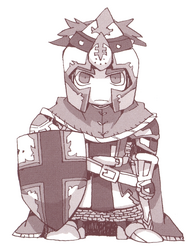 Gordon's theme is "Gordon Sortie!" (ゴードン出撃！, Gōdon Shutsugeki?), also known as "Onward, Gordon!". It is played when he charges.

Gordon belongs to his own unique class: Temple Knight, which is a large spear unit with a different pool of abilities that sets it apart from its Knight cousins. His Crusade Lance also has infinite uses (which means little in the face of his limited availability), and gives him an edge against Skeletons. When in aggressive mode, his attacks inflict holy damage.

Retrieved from "https://deptheaven.fandom.com/wiki/Gordon_(Temple_Knight)?oldid=27953"
Community content is available under CC-BY-SA unless otherwise noted.