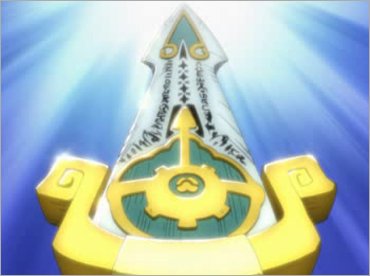 The Holy Sword, Gran Centurio, is a legendary blade that has been an ancestral memento passed down throughout the royal family of Fantasinia; it is to be wielded by the current monarch, and is the signature weapon of Yggdra and Ordene. This "Holy Sword" has been at the heart of every conflict throughout mankind's history, and was crafted by the Fallen One, Nessiah.

The Gran Centurio was a tool of Nessiah's vengeance against Asgard, particularly Hector of the Seven Magi. Its power was fueled by war and bloodshed, and the battles taking place throughout Yggdra Union were the last few needed for it to reach its maximum strength. Had Nessiah defeated the Royal Army and reclaimed it, he would've been able to free himself of his crippling shackles and killed Hector; ironically, because he was not able to acheive his goal, all of the games in the Dept. Heaven series transpired due to Hector going unopposed. In the canon ending of Yggdra Union, the Gran Centurio is sealed away in Heaven's Gate, never to be used again.

The Gran Centurio is a very large sword with a golden hilt and runes carved into its blade. It also seems to grant its wielder the Holy element. Despite its massive size, neither Ordene nor Yggdra have trouble using it in combat and are not weighed down by it at all. This could simply be due to their royal blood, however. Furthermore, upon coronation, the ruler of Fantasinia gains access to its true power: the Strike of Justice known as Crusade.

Retrieved from "https://deptheaven.fandom.com/wiki/Gran_Centurio?oldid=22604"
Community content is available under CC-BY-SA unless otherwise noted.