Riviera: The Promised Land
Knights in the Nightmare

Hades is the king of demons, and the ruler of Utgard, being Asgard's greatest enemy and threat. He is also known as Zolgonark; he started the great war of Ragnarok, which resulted in the Gods' demise.

Hades is a secret post-game boss that can be fought in the GBA and PSP versions. One must obtain the Key to Hell in Mireno Cemetery to access this optional chapter. In the PSP version, one must go through a dungeon before reaching Hades; in the GBA version, he is simply encountered and fought. In the PSP version, it is possible for Ein to be accompanied by Ledah instead of the girls if certain requirements are met first.

Hades appears as Zolgonark, a very powerful demon summoned by Capehorn and Yelma through a ritual.

His class is known as Hades.

Hades is the most powerful boss in the game statistically, sporting HP so high that it shows up as ??? for the majority of the battle. With careful character and item selecting, defeating him will not be too difficult. Hades' Break Out!, Curse of Chaos, is a heavy damaging attack that hits the entire group. Also note that he regenerates a small fraction of his health each time he gets to move, a trait shared with Ledah. 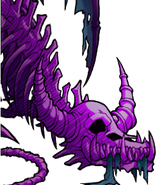 Add a photo to this gallery
Retrieved from "https://deptheaven.fandom.com/wiki/Hades?oldid=26372"
Community content is available under CC-BY-SA unless otherwise noted.