Hector (ヘクター, Hekutā?) is the main antagonist of Riviera: The Promised Land; he facilitated the decision to activate the Retribution, putting his plans in motion. He is a recurring character in the Dept. Heaven series and is one of the Seven Magi. He spent the past several millennia plotting to takeover Asgard. He is a skilled enough magician to accomplish feats thought to be impossible even in Asgard (such as creating the dimensional link between Asgard and Riviera known as the Maze of Shadows).

Hector advanced his schemes by dispatching his servant, Malice to revive demons in Riviera which gave him an excuse to send Grim Angels legitimately (in accordance with Asgard bureaucracy) to actuate the Retribution and destroy Riviera. This in turn, will give him the opportunity to grasp the gods' power for himself. Unfortunately for Hector, Ursula thwarted his plan by kidnapping and convincing Ein, one of the Grim Angels Hector sent, to join her cause. Hector's grandiose and complicated plan is then brought to a screeching halt all because of a single flaw. In addition to his role as main villain here, he has a cameo appearance in Knights in the Nightmare and is mentioned in Yggdra Union.

During the aforementioned two games in the series, Hector is shown having brought about the utter ruin of Aries, narrowly avoiding his vengeance through the interference of the Royal Army in Yggdra Union (who were all unaware of the bigger picture), abusing his test subjects, and sending the gods' most devout servant on a suicide mission that results in her fall from grace. He is voiced by Sugiyama Noriaki in the PSP version of the game.

Hector absorbs the ice element in his base form. However, Hector has the ability to change his element at will (at the cost of a turn). The most powerful form is Dark Mode, which voids all elemental attacks and is susceptible only to physical and holy damage. His Break Out skill is Ether Burst, which also changes elements and hits all team members with unavoidable heavy damage and a high chance of causing the status effect associated with his current element. If the party is not conscientiously-trained, they should bring a good healing item and focus on inflicting physical damage, with multiple weapons of various elements in case he shifts forms.

However, a well-trained party with high HP can opt for a more aggressive S-Rank strategy, which aims to trap Hector in his Ice Form and wear him down as quickly as possible:

Weapons: Zephyr, Leyte Claw, two other weapons depending on the character. (Diana's Bow and any healing item, preferably Dragon Steak if using Lina, Rosier and Book of Kirie/Holy Water if using Fia).

Each party member can build up overdrive with multi-hitting attacks (Zephyr for Ein) to eventually keep Hector in an Ether Burst loop, preventing him from shifting forms. Ether Burst has a massive WT penalty for Hector. Serene is immune to freezing and does tremendous damage with Leyte Claw (and No Mercy). Ein can heal the party with Mimic Ray, but Serene should exploit the low-hp property of No Mercy whenever possible. The player can choose Lina for a more aggressive strategy, with Leyte Claw and Stardust (which out-damages Mimic Ray and No Mercy but lacks healing) or choose Fia for a more conservative strategy (she has high Freeze resistance and can group heal, or deal reasonable damage while healing herself with Ether Edge if Ein is frozen). If Lina is chosen, the battle can end with either Mimic Ray or Stardust. If Fia is chosen, Mimic Ray should be used to end the battle. The other Overskills not mentioned here should not be used due to sub par damage.

There is a danger of both Ein and Lina/Fia getting frozen, which is problematic if the player is about to finish Hector off but is unable to access Mimic Ray or Stardust. This may warrant a restart. If Fia is in the party and is not frozen, she can use Sacred Heal with the Holy Water to free Ein, but the overdrive gauge must be built up again (and it is difficult to carry Holy Water so far into the game). 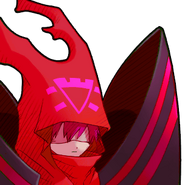 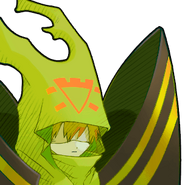 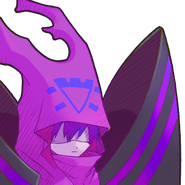 Hector's dialogue portrait in Knights in the Nightmare

A view of Hector's domain within Asgard, with Primea on the left and the Proxy himself on the right
Add a photo to this gallery