Imperial Knights do not start appearing until late into Chapter 4 of Yggdra Union, and should not be taken lightly. Their weapon affinity grants them control over the weapon triangle, and is neutral against all other weapon types. They also wield Fire when in aggressive mode; being a large-type unit can also make it difficult to defeat them. These formidable foes are direct subordinates of Emperor Gulcasa.

The Imperial Knight doesn't have many useful abilities; one useful one, and one handicap.

Imperial Knights are statistically solid, having superior GEN and ATK, decent TEC, but they fall short in LUK. 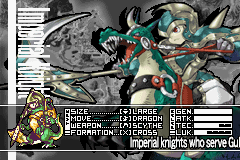 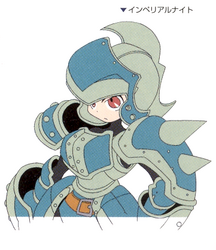 Imperial Knight's art.
Add a photo to this gallery

Retrieved from "https://deptheaven.fandom.com/wiki/Imperial_Knight?oldid=19190"
Community content is available under CC-BY-SA unless otherwise noted.