Inzaghi (インザーギ , Inzāgi?) is a twenty one-year-old mercenary hired by Gulcasa to give Bronquia some extra muscle. He and his mercenary crew are used as spare soldiers for the Empire. Inzaghi harbors a grudge against Milanor, forming some semblance of a rivalry with him. Inzaghi, following several bouts with the Royal Army, is never heard from again after the final battle with him during the assault on Castle Karona.

Inzaghi is extremely lazy and tends to try to get away with as much slacking as he can while still maintaining a paycheck. Not surprisingly, he also tends to take a lot of flack from his superiors (whomever they may be) for it. Extremely hedonistic, he's reputed to be willing to do anything for money. He seems to like hats, as all his equipment happens to be various kinds of headgear. 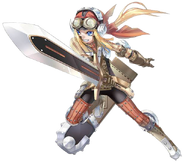 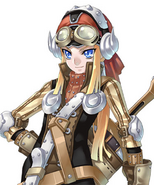 Inzaghi in Blaze Union
Add a photo to this gallery

Retrieved from "https://deptheaven.fandom.com/wiki/Inzaghi?oldid=22321"
Community content is available under CC-BY-SA unless otherwise noted.