Isher, known as the Demon Knight, is the second Accursed fought in Riviera: The Promised Land. He is encountered at the end of Lacrima Castle and is heavily armored. When battled the first time, Isher is impervious to all attacks; during the fight, Isher taunts Ein, provoking him to use his Diviner. After using Fallen Crest on the party for the first time, Ein quickly realizes that they have no chance of winning and the fight will end. Ursula will intervene and restore the true power of Einherjar, which will render Isher vulnerable to attacks. Isher returns under the name "Dark Isher" in the Maze of Shadows as a Dark Progenitor. You are rewarded the Excalibur if an S-Rank is achieved.

Accursed (Unwinnable)
Add a photo to this gallery 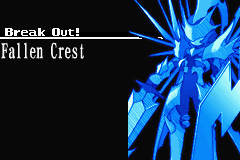 The Demon Knight (Winnable)
Add a photo to this gallery 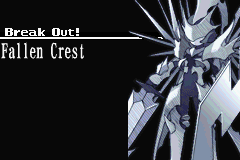 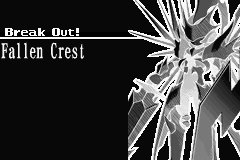 Isher encounter CG from the PSP port.
Add a photo to this gallery

For the first battle, simply bring a healing item and two more items with a lot of uses and bide out the battle until its scripted end. Einherjar is forced into the fight. You cannot Skill Up when this fight ends.

For the real fight, Isher's attacks will be more powerful, but his STR stat has decreased slightly. Physical attacks inflict very little damage on him due to his high STR, and his Guard rate makes him even more durable. Since Einherjar is mandated, the player can bring only 3 optional items into this boss fight. A healing item is highly recommended for this fight, particularly a book. Fia can use it to heal your party all at once, and if there is wiggle room, she can perform her Over Skill with it, which is unblockable and always hits. Try to pick on his low Magic when selecting your items, characters, and formation.

When going in for the kill, reduce Isher's HP down to about 30%-ish, and make sure to have a fully-charged Disaresta ready to go. Isher's Guard activates at random, and can stall the battle if you are unlucky, taking away your S Rank chance. Just be sure to heal often and watch out for Fallen Crest.

Another option to defeat him easily and achieve an S Rank is available if you gained the Rosier x1 from Heaven's Gate. Prior to the battle, have Fia master it in Practice mode, thus granting her access to Cadenza, which is intended to be used in the final chapters and has the unblockable property. During the battle, simply build the Overdrive Meter to the third tier and unleash Cadenza ASAP, which will unerringly kill Isher even with nearly full health. Fia's stats must be high enough overall for this to guarantee success.

Retrieved from "https://deptheaven.fandom.com/wiki/Isher?oldid=27516"
Community content is available under CC-BY-SA unless otherwise noted.