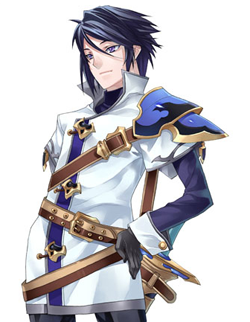 Childhood friend to Garlot and Siskier, and the primary tactician for Gram Blaze. Jenon is voiced by Shinji Kawada. He is the same age as Garlot and Siskier. Jenon has a flair for the dramatic and flirts with every woman he sees, although certain routes reveal that he actually only has feelings for Siskier (a fact of which Garlot is aware, but Siskier herself is not). Jenon is more pessimistic than either Garlot or Siskier and presents himself as far more of a skeptic, and is also more well-read; he is the only one of the three of them who is aware that the world is round, for instance.
Optional events reveal that Jenon is a noble, although he conceals this fact from his friends, and that he ran away from home to join Garlot's battle against class discrimination and the oppression of the weak. His father supports Pandra's rebellion, and so Jenon's parents flee Tiera at the end of chapter 5, after it is attacked. While Jenon is not a lead character, he still has an important role; during the A path, he conspires with Medoute to betray Gulcasa, and during the C path, he sacrifices himself to protect Siskier and Ordene and chooses to die without confessing to Siskier when he realizes that she loves Garlot. 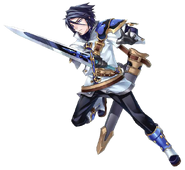 Add a photo to this gallery
Retrieved from "https://deptheaven.fandom.com/wiki/Jenon?oldid=19404"
Community content is available under CC-BY-SA unless otherwise noted.