Juvelon (ユベロン, Yuberon?) is an antagonist in Yggdra Union. Forty-nine years of age; a cardinal of the Meria religion and head of its elitist new sect. Despite his physical appearance, he is younger than he looks. He is revealed to be an extreme coward, and tries ineffectually to plead for his life, denying his involvement in the movement to overthrow the Pope. It doesn't work. His soldiers are devoted to him, sometimes mindlessly, as in the case of his chief assassin, Amareus. He is the oldest Officer on entire Forces on Yggdra Union while the youngest Officer was Emilia from Bronquian Empire. He's voiced by Haramaki Kouji in the PSP version. 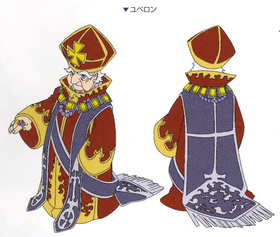 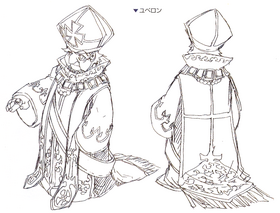 Juvelon's art (colorless).
Add a photo to this gallery

Retrieved from "https://deptheaven.fandom.com/wiki/Juvelon?oldid=28702"
Community content is available under CC-BY-SA unless otherwise noted.