Knight (ナイト, Naito?) is a fairly common unit class in Yggdra Union. Knights are large type units who use lances and have access to their signature skill: Chariot, which takes advantage of their large characteristics. These units also excel on terrain that is seen commonly throughout the game, which can make them formidable in some cases. Knights stand  little chance against their female counterpart: Griffon Rider.

This class has some very useful abilities, but come crippling weaknesses as well. It is also worth noting that mounted units have the ability to slip past enemies, though they cannot land on occupied tiles. It is unknown if the AI ever takes advantage of this, though it's doubtful. 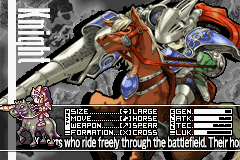 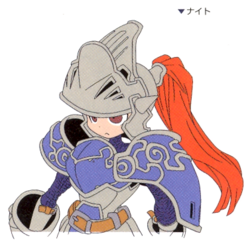 Retrieved from "https://deptheaven.fandom.com/wiki/Knight_(YU)?oldid=29801"
Community content is available under CC-BY-SA unless otherwise noted.