Lance Knight (ランスナイト, Ransunaito?) is a Knight Class in Knights in the Nightmare. These units have no blind spots, making them adept attackers in any direction.

A mounted warrior wielding a strong lance. The horse provides maneuverability across the battlefield, running the enemies down.

Lance Knights are the only class that can attack in all four directions.

Pierce: Use the lance to thrust ahead in a straight line. The Law attack reaches four squares in front.

Trample: Trample enemies ahead. Not possible on different levels. The Chaos attack reaches two squares in the front and one on either side.

Additional Effect: At the end of the attack, the knight moves forward one or two squares depending on the charge. 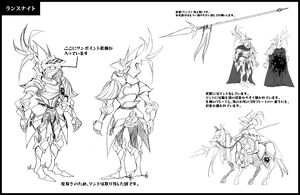 Retrieved from "https://deptheaven.fandom.com/wiki/Lance_Knight?oldid=26394"
Community content is available under CC-BY-SA unless otherwise noted.