Lindwurm Is the third Accursed fought in Riviera: The Promised Land; encountered at the Apex of Nelde Ruins. Lindwurm is a titanic wyrm who uses Ice Breaths. He is later refought as "Dark Lindwurm" in the Maze of Shadows as a Dark Progenitor. Managing an S Rank on Lindwurm will yield the Tempest Bow.

The Heavenly Wyvern
Add a photo to this gallery 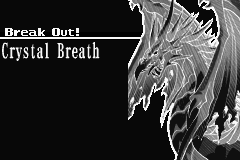 Lindwurm's high strength and Physical resistance will make it difficult to inflict damage on him with many items. Also, the moderately high freeze rate of his Breath Attacks can prove troublesome. Bring in as many items that he is weak to as you can and choose your formation and characters carefully. Even though he has high Strength and a bit of resistance to Holy damage, Ein's Disaresta is still potent when used on him, so it is a good Over Skill to use as a finisher. Cierra's Cinder Squall with the Ruby Staff and Lina's Trinity Spark with the Lightning Bow are the two most damaging Over Skills. Despite exploiting two weaknesses, Trinity Spark actually does less damage than Cinder Squall, but is less likely to miss. Crystal Breath is actually not very damaging; the main threat is the freeze chance.

It is recommended to select Magic Formation (two characters in the back row) against Lindwurm as he will then use Poison Wind over Blizzard for his Rage move. While Poison is rather debilitating, it is vastly preferred over Freeze in this battle.

The trick to getting extremely fast S-ranks (below 100 ticks) against Lindwurm involves the Flag item, which can be obtained by deliberately A-Ranking the battle with the Lizardmen on the Wooden Platforms. Ein's Normal Skill with it will allow Cierra and Lina to fire off their Over Skills very early. There is still a luck factor involved as Cierra misses rather often. The Black Earrings can remedy this at the cost of some WT.

Retrieved from "https://deptheaven.fandom.com/wiki/Lindwurm?oldid=27501"
Community content is available under CC-BY-SA unless otherwise noted.