Start a Wiki
Luciana Rune Artwaltz (ルシエナ＝ルーン＝アルトワルツ, Rushiena Rūn Arutowarutsu?) is one of the twin valkyries under Gulcasa's command. Both she and her sister Aegina are eighteen years of age.

It is revealed in Yggdra Union's prequel game, Blaze Union, that she and her twin sister were actually born as princesses of Fantasinia, but an order to assassinate them came right after they were born. A soldier managed to smuggle them out of the country, after which they were adopted by a noble named Marquis Albelt and raised in seclusion within his city. Both she and her sister Aegina were told that they were abandoned because of the old superstition that twins were bad luck, and thus the two of them spent their lives learning to fight so that they could one day kill the father who abandoned them as well as Yggdra, the younger sister who replaced them.

She is voiced by Fujino Tomoko in the PSP version.

Luciana is more cheerful and lighthearted than Aegina, and more prone to joking around. In the prequel game Blaze Union, she also appears to be quite the prankster, cooperating with Emilia to cause trouble whenever they get angry. However, she is also a very responsible girl, and does her best to look after Aegina. 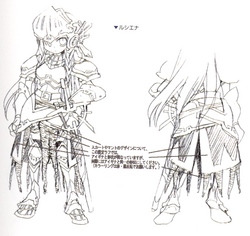 Luciana's art in Yggdra Union (colorless).
Add a photo to this gallery

Retrieved from "https://deptheaven.fandom.com/wiki/Luciana?oldid=28471"
Community content is available under CC-BY-SA unless otherwise noted.