Start a Wiki
Mardym (マルディム, Marudimu?) is an antagonist in Yggdra Union. First appearing to be Juvelon's subordinate, Mardym is an archbishop of Meria, and is twenty-nine years old. It turns out that he's simply manipulating Juvelon and intends to betray him in order to control Lombardia and the Meria religion. Mardym is heavily implied to be an atheist who is involved in religion for its power and luxuries, and is said to be taking payments from Bronquia to keep Juvelon in line and sabotage Joachim. Just like Juvelon, he too is younger than he looks despite his physical appearance. He's voiced by Fujiwara Katsuya in the PSP version. 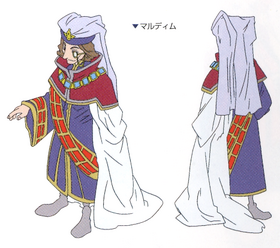 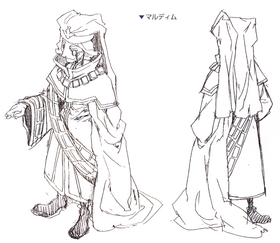 Mardym's art (colorless).
Add a photo to this gallery

Retrieved from "https://deptheaven.fandom.com/wiki/Mardym?oldid=19237"
Community content is available under CC-BY-SA unless otherwise noted.