An itinerant traveler who first appears following Garlot's band out of curiosity. She aids them in battle against the mercenary David, but then thoroughly criticizes their reckless methods, insisting that Garlot is not powerful enough or wise enough to enforce his ideals as he is now. When she realizes how much of an impact her words had on him, Medoute decides to join up with Gram Blaze as a way of taking responsibility, and acts as an older sister and mentor to the rest of the group. During chapter 3, she spends many missions impressing her view of morality onto the others.
In every route, it is revealed that Medoute is a descendant of Dragonslayer Gill, the hero who defeated Brongaa in ancient times. She was raised as a dragonslayer, but because she doesn't believe in destiny, she ran away from home and began to travel the world as a way to rebel against her heritage. She mentions that the hermit seen in Battlefield 25 of Yggdra Union is her grandfather, and that she is a resident of Lost Aries, current homeland for exiled Vanir Tribe that was mentioned by Kylier in Yggdra Union. Despite her resentment toward the way she was raised, she still becomes suspicious of Gulcasa and Emilia after discovering their heritage; she betrays Gulcasa in the A path, and if Emilia loses her mind during the B path, she explains that Emilia must now be killed. Her attitude can be viewed as racism against demons, although it is never defined in as many words.
Medoute is 168 cm tall, and loves travel rations. She is twenty-one years old. She is voiced by Rie Tanaka. 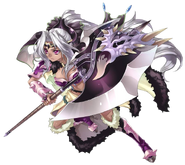 Medoute's concept art.
Add a photo to this gallery
Retrieved from "https://deptheaven.fandom.com/wiki/Medoute?oldid=29585"
Community content is available under CC-BY-SA unless otherwise noted.