Milanor (ミラノ, Mirano?) is a seventeen-year-old thief who resides in Norn Valley, a Fantasinian territory. Nicknamed "the Silver Wolf" (銀狼のミラノ Gin ōkami no Mirano) for his albino hair and swift movement, Milanor is the leader of a band of thieves. His hideout was destroyed by Bronquian soldiers led by the valkyrie Luciana. Angered by the destruction of their home, Milanor and his followers take vengeance on Bronquia although he already fought with some of Bronquia's Imperial soldiers a few times before. Milanor comes across Princess Yggdra and agrees to help her raise an army to free Fantasinia—in exchange for her castle when the fighting is done. When at last Paltina is reclaimed, Milanor feels uncomfortable with the prospect of a settled life, longing for the unknown reaches of the continent. He has scarcely time to reconsider the path his life has taken, before Yggdra is captured by Gulcasa. He takes off after her, against the wishes of his longtime friend Kylier. After Yggdra's rescue, Milanor remains a vital asset to the Royal Army and Yggdra's closest confidant. His soul is torn, however, when Kylier sacrifices herself to destroy the Ankh Cannons.

Milanor is the main protagonist during certain parts of the game, and is voiced by Sawashiro Miyuki in the PSP version. His signature card is Steal, and he joins equipped with the Silver Moon, which grants him no battle penalty.

He's rough-natured and claims to always act in his own best interests, but he has a large group of loyal followers. He's very friendly with Yggdra and her followers, much to the chagrin of his best friend and right-hand lady rogue, Kylier. Milanor also matures over the course of the plot, going from being the comic relief to one of Yggdra's major sources of support. 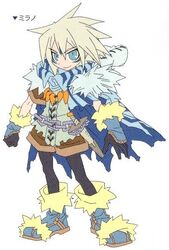 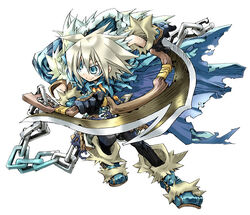 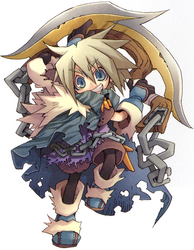 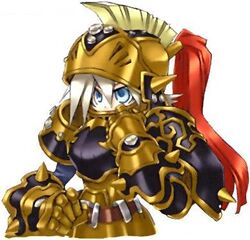 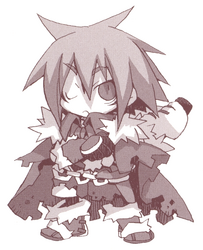 Chibi Milanor.
Add a photo to this gallery

Retrieved from "https://deptheaven.fandom.com/wiki/Milanor?oldid=30702"
Community content is available under CC-BY-SA unless otherwise noted.