Necromancer (ネクロマンサー, Nekuromansā?) is a Skeleton-summoning sorcerer who wields a rod. This class is the male counterpart of Witches, and as such they wield rods, which gives them control over the weapon triangle; Rods are, in return, weak to bows. During an aggressive assault, a necromancer's attacks against their enemies gain dark elemental damage just like that of an assassin's. Only Necromancers are able to use Necro Gate to summon Skeleton soldiers. As a rod user, necromancers can be used as aces for the tactics card Flame.

Necromancers have more characteristics than Witches. Necromancers gain the ability to warp when night comes, which is a handy skill when used correctly. They also have the following abilities: 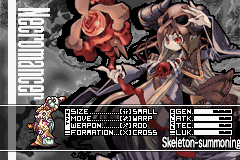 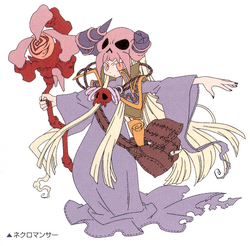 Necromancer concept art.
Add a photo to this gallery

In Gungnir, Necromancer is the signature class of Isabeli. This class is handy with scrolls.

Retrieved from "https://deptheaven.fandom.com/wiki/Necromancer_(class)?oldid=30233"
Community content is available under CC-BY-SA unless otherwise noted.