Pamela (パメラ, Pamera?) is a strange young witch who fetishizes Undines, and is the series mascot. She was introduced in Yggdra Union, and has appeared in each Dept. Heaven title except for Riviera: The Promised Land.

Pamela only had a brief appearance in the GBA version of Yggdra Union, but can be recruited in the PSP port. Her age is listed as "unknown" in most of the extras, but the official website states her to be fifteen years old. While little was shown about her in the original game, her role is explained in more detail when she joins the Royal Army. Pamela is on a quest to obtain eternal life (and eternal youth), and is studying the Undines to see how they use the Transmigragem to reincarnate.

The extras reveal that she is one of the Yumil, a race of Sprites who live in a parallel dimension known as Yumira. Over a thousand years ago, they sheltered and supported Nessiah when they found out who and what he was. The Yumil helped him to master the Power of Words in exchange for one of his eyes. Pamela's quest for immortality is implied to be inspired by her people's memories of Nessiah's tragic fate.

Pamela is ditsy and childish; her perspective on the situations she gets involved in are extremely unrealistic. She has been know to cry or throw a temper tantrum when denied what she wants. Pamela loves all things to do with Undines and strange objects, and doesn't get along with Rosary. She also, like many women of the party, occasionally flirts with Roswell. In the PSP version she's voiced by Ai Nonaka in Japanese and Melissa Fahn in English.

Pamela's recruitment is not straightforward, and requires the completion of Normal mode on the PSP Version only. First, ensure that you have obtained at least one of Pamela's three items (listed below) on any save file, then proceed to Marduk Woods in a subsequent playthrough. Expose her hiding spot on both BF23 and BF24 and place Nietzsche next to her, which should trigger special conversations in each. She should join in BF24 if everything was done correctly.

Pamela is a recruitable Priestess in Knights in the Nightmare; she requires the Key Item Dreamer's Hat to join. She appears in Scene 24.

Pamela appears once again in Gungnir, but as an enemy boss character. She was hired by Rodrigues as a mercenary of sorts, and she claims to have "summoned" Esperanza to their base (when in actuality they were merely passing through). Though her role in Gungnir is brief, it's clear that she's not well-liked by Rodrigues' brigade. 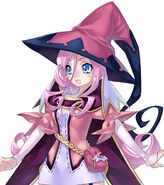 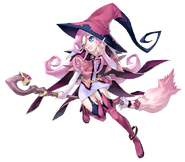 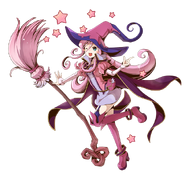 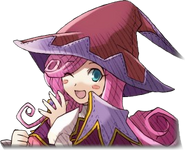 Pamela's Portrait in Knights in the nightmare.
Add a photo to this gallery

Retrieved from "https://deptheaven.fandom.com/wiki/Pamela?oldid=30798"
Community content is available under CC-BY-SA unless otherwise noted.