The young granddaughter of Cardinal Capehorn. Raised in solitude save for some knight attendants, she quickly develops a childish love for Prince Nordich.

"The gentle-hearted granddaughter of Cardinal Capehorn. She has few acquaintances within the palace, and her feelings for Prince Nordich grow every day. The prince also shares her feelings, but they are unable to meet publicly. Due of political obligations, the Prince was arranged to marry the Princess of the Tiamats" 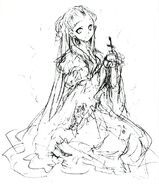 Piche as the boss in Scene 38
Add a photo to this gallery
Retrieved from "https://deptheaven.fandom.com/wiki/Piche?oldid=29181"
Community content is available under CC-BY-SA unless otherwise noted.