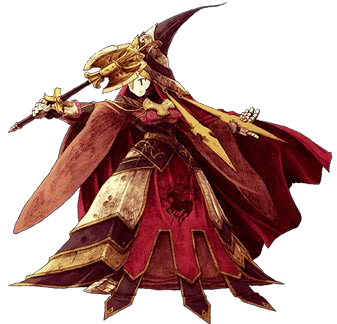 Priestess (プリエステス, Puriesutesu?) is a Knight Class in Knights in the Nightmare. These units excel at being placed behind the enemy to attack from the rear.

A holy woman who uses magic gained through devotion to her faith. She swings her mace to purify approaching enemies with magic.

The spells of the priestess have long reaches, rivaling that of her Wizard counterpart.

Cross Spell: Hold the mace high to attack enemies in a T-shaped spread. This Law attack has a very long reach.

Gram: Place a magic trap on the desired space to harm unwary foes. 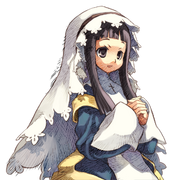 The Priestess is a healing and support specialist. Healing magic from grimoires is usable only by the Priestess and Alchemist, so it would be valuable to train one in your army. Tougher than most spellcaster units, the Priestess can also swing a mace in melee if the situation calls for it.

Retrieved from "https://deptheaven.fandom.com/wiki/Priestess?oldid=24425"
Community content is available under CC-BY-SA unless otherwise noted.