Roswell Branthèse (ロズウェル・ブランテーゼ, Rozuweru Burantēze?) is a playable character in Yggdra Union and Yggdra Unison. He is the twenty-one-year-old lord of Branthèse (or the House of the Black Rose), the northeastern part of Verlaine. He's a fiercely intelligent and fairly young necromancer, and known to his people as a kind ruler. When the Royal Army meets him, though, he's feuding with his distant cousin Rosary over a pair of magical artifacts known as Ankhs. Said feud has just erupted into civil war, as Rosary attacks him. He retaliates, of course, and the only way the Royal Army can prevent Verlaine from being destroyed in a bloodbath is by killing either Roswell or Rosary. If Rosary is killed, Roswell joins the Royal Army shortly afterward.

Unabashedly something of a geek when it comes to all things magical; he's like a walking encyclopedia of arcane things and supplies the player with lots of magic-related info. Roswell is fond of intellectual material, likes to get even with those who cross him, and (curiously) likes bananas. Through his sub-event and battle dialogue, it is revealed that he matures greatly over the course of the game, becoming a wise and gentle individual.

Roswell in the opening video. 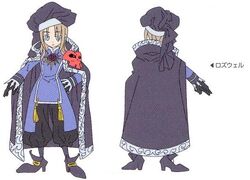 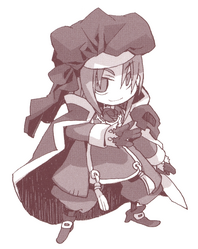 Chibi Roswell.
Add a photo to this gallery

Retrieved from "https://deptheaven.fandom.com/wiki/Roswell_Branth%C3%A8se?oldid=30654"
Community content is available under CC-BY-SA unless otherwise noted.