Start a Wiki
Russell (ラッセル, Rasseru?) is a playable character in Yggdra Union and Yggdra Unison. Initially introduced as one of Gulcasa's top five generals, the twenty-five-year-old Russell is a swordsman who shows honor and chivalry towards both his allies and his enemies. He is known for his title as the "Astral Fencer". It is revealed in the fourth chapter that he has been enlisted in the Imperial Army by force—he was once part of the original Royal Army, but when Gulcasa captured Russell's home (Castle Karona, sitting right on the border of Bronquia) he was impressed by the swordsman's abilities and spirit and asked Russell to join the Imperial Army so that Gulcasa wouldn't have to kill him. Russell refused, but rather than lose such a strong fighter, Gulcasa imprisoned Russell's fiancée, Flone, with a promise to let her go once the war ended. If the player rescues Flone, Russell can be recruited, but otherwise he dies in the Royal Army's attack on Karona. 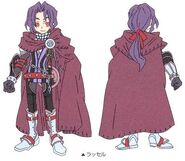 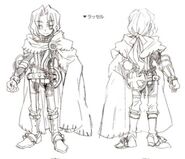 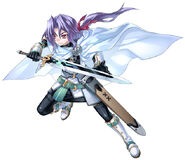 Retrieved from "https://deptheaven.fandom.com/wiki/Russell?oldid=26923"
Community content is available under CC-BY-SA unless otherwise noted.