Seth-Rah is the final boss of Riviera: The Promised Land. She is a fusion between Hector and Ursula's counterpart, Seth. Seth-Rah is an omnipotent, god-like entity who aimed to destroy Riviera and rebuild it from the ashes. Seth-Rah claims that she is neither Hector nor Seth, but an entirely different being. S-Ranking this boss earns you the Longinus.

Seth-Rah, statistically, is the strongest boss in the main story. Having only 3 of the girls to choose from, plan your items, characters, and formation carefully and watch out for Seth-Rah's resistances. Be sure to bring in at least one item allowing for a Lv. 3 Over Skill and keep your attacks fairly varied.

With a well-trained party and the Rosier, the player can just bring Ein, Serene and Fia, swapping one out for Cierra if they were taken. The multi-hitting attacks can keep Seth-Rah in Magic form while Fia wears them down with Cadenza. If Fia was sacrificed, Ein can substitute with Terre Promise. Seth Rah's Ragnarok is not that much of a threat unless the party is undertrained. The battle ends with Disaresta, and getting an S-Rank is easy even without Fanelia or Longinus. It helps to do a dummy run to see how much damage Disaresta does beforehand.

Among all the bosses, only Seth-Rah's S-rank reward, the Longinus, can be obtained twice legitimately in a game save: by clearing the game with an S-rank victory over Seth-Rah and starting a new game, an extra Longinus will be obtainable in Chapter 1, replacing the holy Rosier. 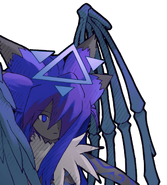 Attack Form
Add a photo to this gallery
Retrieved from "https://deptheaven.fandom.com/wiki/Seth-Rah?oldid=26332"
Community content is available under CC-BY-SA unless otherwise noted.