Skeletons are a common unit type, having a presence in each episode.

Skeletons first appeared in Riviera: The Promised Land as a demon class. In this game, they belong to the Undead Family of demons.

Lawless Beings
Add a photo to this gallery 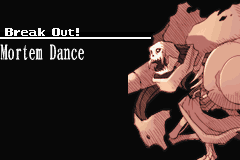 Skeleton soldiers summoned from the land of the dead. Their skill "Poison Breath" makes the enemy suffer!

None, but can join Unions if aligned properly.

Skeleton is a fairly weak class in Yggdra Union. Skeletons have a glaring weakness in that they fall asleep in the noon time of day, rendering them completely helpless until the Day cycles. Skeletons do have one plus: their signature skill Poison Breath, which inflicts their target with the Poison status.

Skeletons have no real useful abilities, but handicaps instead. Also note that their Lump weapon affinity grants them no weapon advantages nor disadvantages, and they cannot initiate unions.

Skeleton is an enemy class in Knights in the Nightmare.

A monster bearing a deep grudge that will revive itself in time.

Skull Crusher: The skeleton sends out three revolving bullets in a wide arc.

Special: The Skeleton remains on the field when reduced to 0 HP. It requires a Skill attack to destroy fully. After some time, it attempts to revive; this can be stopped with a regular attack or the jamming gear.

In Gungnir, the Skeleton class wields Swords and Rapiers, and are able to equip Shields as well to help them guard against enemy assaults. A trait that is unique to them, is that being undead, they cannot be expelled permanently from the battle when their HP is reduced to zero (0). The only way one can be rid of them for good is by using a skill that has the Purge Corpse ability; the Rosier's Action II: Vertical Epic can insta-kill skeleton units, making it very useful against them.

Skeletons are typically seen in battles under the command of the necormancer Isabeli. Isabeli has a skill called Hades Invitation, which has a low Cast Time and will turn whomever she targeted temporarily into a Skeleton. This can prove troublesome, as not all units are able to use the sword and rapier weapon types, and thus will likely not have them equipped.

Retrieved from "https://deptheaven.fandom.com/wiki/Skeleton?oldid=30898"
Community content is available under CC-BY-SA unless otherwise noted.