ウンディーン (Undine, Undīn?) is a species that appear in multiple Dept. Heaven titles, most prominently in the Yggdra Union Subseries. They are a 100% female species, and are inherently peaceful.

In Riviera, Undines are considered to be among the sprites. Their only known habitats are Undine Spring and Tetyth. This race is one of various NPCs, and are not hostile.

Undine is a unit class in Yggdra Union. This class is handy with spears, giving them an advantage over the swordsmen, but they are weak against axe users. This class' signature ability is their high affinity in water, which gives them the ability to swim in it safely and grants them a performance boost during clashes. Because they are female only, it is revealed that they may not have reproduction capabilities; instead they survive by reincarnation, through the power of the Transmigragem. The signature move of the Undines is Diamond Dust, a variation of Blizzard.

Undines possess a couple of abilities unique to its class, as well as a few handicaps. 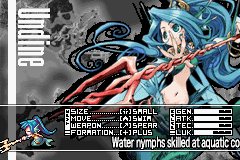 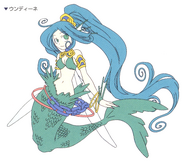 Undine concept art.
Add a photo to this gallery

Retrieved from "https://deptheaven.fandom.com/wiki/Undine?oldid=24024"
Community content is available under CC-BY-SA unless otherwise noted.