Valkyrie (ヴァルキリー, Varukirī?) is a recurring Unit Class in the Dept. Heaven series.

Valkyrie is an enemy-only class in Yggdra Union. Their weapon affinity is sword. Valkyries channel the Holy element when fighting with aggression. Though the player does not gain access to any Valkyries, they instead have a substitute: a Sword Maiden in Yggdra.

Valkyries possess a couple of mildly useful abilities, and a weakness to Darkness. 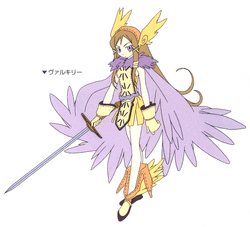 Valkyrie concept art
Add a photo to this gallery

In Knights in the Nightmare, Valkyrie is unique to Maria. Playing a very important role, this class is able to wield all weapon types. However, it has low VIT, and her death results in a Game Over.

In Gungnir, Valkyrie is the signature class of the mysterious Elise, who appears to Giulio shortly after he obtains the Magic Spear Gungnir. Valkyries are versatile units capable of both ranged and melee combat. Rapiers can only be blocked by shields, making the Valkyrie an obvious choice to initiate Beat Actions.

Retrieved from "https://deptheaven.fandom.com/wiki/Valkyrie?oldid=24032"
Community content is available under CC-BY-SA unless otherwise noted.